Hmmm there seems to be a problem fetching this series right now. Last successful fetch was on January&nbsp24,&nbsp2023&nbsp04:45 (

What now? This series will be checked again in the next day. If you believe it should be working, please verify the publisher's feed link below is valid and includes actual episode links. You can contact support to request the feed be immediately fetched.

On November 10, 2010, in broad daylight, a man broke into the home of Tina Herrmann and her two young children. The attacks, murders, and kidnapping that followed were some of the worst crimes in the history of the state of Ohio.

Matthew Hoffman was known by his neighbors as a bit of an oddball, but this didn’t necessarily mean that he was dangerous. He did have a history of breaking and entering that put him in prison once, but he didn’t appear to be a violent person. Then, in 2010, Hoffman’s odd behavior began to escalate.

Join us at the quiet end for House of Leaves. Tina was a working mother, determined to give her son and daughter a stable, safe, and loving home. Despite not having much money, she had been successful. But Tina had no way of knowing that her home had become the target of the increasingly disturbed Hoffman. When Tina didn’t show up for work on November 11, the scene inside her house pointed to unspeakable violence. And, when the police entered Hoffman’s home, what they saw inside was unlike anything they’d seen before.

Support the show for ad-free and bonus episodes and more!

The Girl in the Leaves by Robert Scott 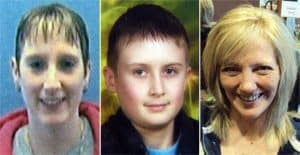 34m ago34m ago
Subscribe
Unsubscribe
Daglig
Nancy Grace dives deep into the day’s most shocking crimes and asks the tough questions in her new daily podcast – Crime Stories with Nancy Grace. Nancy Grace had a perfect conviction record during her decade as a prosecutor and used her TV show to find missing people, fugitives on the run and unseen clues. Now, she will use the power of her huge social media following and the immediacy of the internet to deliver daily bombshells! Theme Music: Audio Network
T
True Crime Obsessed

1d ago1d ago
Subscribe
Unsubscribe
Ukentlig+
The true crime / comedy podcast YOU NEED IN YOUR LIFE. We recap your favorite true crime documentaries with humor, sass, and heart. FROM VULTURE: "It’s not wrong to laugh when you’re listening to a true-crime podcast. Or at least I hope it isn’t, because if almost crashing my car while listening to True Crime Obsessed is wrong, I don’t want to be right." Hear our take on "Abducted in Plain Sight," "The Ted Bundy Tapes,"Dirty John: The Dirty Truth" and so many more.
T
The Trail Went Cold

1d ago1d ago
Subscribe
Unsubscribe
Ukentlig
The weekly UK True Crime Podcast, hosted by Adam, is the home of UK true crime. With a new episode every Tuesday since 2016, it is where you discover lesser known UK cases and discover new perspectives and insight on stories you may already know.
H
Happy Face Presents: Two Face

16h ago16h ago
Subscribe
Unsubscribe
Månedlig
What would you do if you learned you were adopted, your biological mother was a convicted murderer and your father’s true identity was a mystery? This is what happened to Becky Babcock, the daughter of the infamous Diane Downs. Join Melissa Moore, host of Happy Face Season 1, as she helps Becky unravel the strange tale of her family, searching for answers to decades-old mysteries that remain unanswered in the modern day.
D
Dark Poutine - True Crime and Dark History

3d ago3d ago
Subscribe
Unsubscribe
Ukentlig
Every day, stories unfold that have no resolution. Unresolved is an investigative and immersive look at those stories, as host Micheal Whelan tries to determine why these stories - unsolved crimes and other unexplained phenomena - have no ending.
A
Australian True Crime

1d ago1d ago
Subscribe
Unsubscribe
Ukentlig
Think nothing ever happens in your town? Australia's suburbs are home to some of the most mysterious and disturbing true crime cases in the world.Meshel Laurie is a true crime obsessive. Emily Webb is a true crime author. And together with expert interviews with writers, victims, investigators and perpetrators, they probe the underbelly of our towns and suburbs, and uncover the darkness at the heart of Australian life. Support this show http://supporter.acast.com/australiantruecrime. For a f ...
S
Southern Fried True Crime

8d ago1w ago
Subscribe
Unsubscribe
Ukentlig
Erica Kelley is a native Tennessean exploring historical and contemporary true crime in the South. Southern charm is attempted but southern sass is bountiful. Join her as she shows you just how southern fried the justice system can be in the Deep South.
M
Man In The Window: The Golden State Killer

2y ago2y ago
Subscribe
Unsubscribe
Månedlig
In Man in the Window, Paige St. John, a Pulitzer Prize winning investigative reporter has uncovered never before revealed details about the man who would eventually become one of California's most deadly serial killers. From Wondery and the L.A. Times comes a new series that traces his path of devastation through his victims' eyes.
Lytt til 500+ tema