In the spring of 1995, 27-year-old Lynn Turner came into the hospital emergency room in Marietta, Georgia, to have a bump on her head looked at. When her husband Glenn heard where she was going, he came along. Glenn had been suffering from stomach pains with vomiting, severe headaches, nosebleeds, and dizziness for days. Lynn didn’t seem especially concerned about her husband, who she said had a stomach bug. When Glenn was seen by a doctor, he was diagnosed with dehydration and admitted for IV fluids. He was just 31-years old and was expected to perk up quickly. But, by the next afternoon, Glenn Turner was dead.

The county medical examiner concluded that Glenn had died of a cardiac arrhythmia. Soon after his funeral, his wife Lynn collected about $200,000 in insurance proceeds and death benefits. Then she moved in with her lover, firefighter Randy Thompson. Six years later, Randy died after suffering from a flu-like illness. His death, too, was attributed to cardiac disease.

Join us at the quiet end for Widowed by Choice. After Randy Thompson’s death, family and friends became suspicious and spoke with police investigators. Lynn’s history of deception, infidelity, and greed led to further inquiries into both Glenn and Randy’s deaths, finally exposing Lynn Turner as a seductive and cold-blooded killer. 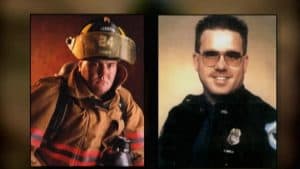 23d ago3w ago
Subscribe
Unsubscribe
Månedlig
Journey into the underworld of American organized crime and the stories behind the rise and fall of the most notorious mobsters in history. From Charles “Lucky” Luciano and John Gotti, to Donnie Brasco, “Bugsy” Siegel and Dutch Schultz–Mafia explores the lives of our greatest gangsters and the cops and attorneys who worked to bring them down.
T
The Trail Went Cold

5d ago5d ago
Subscribe
Unsubscribe
Ukentlig
"What the Hack with Adam Levin" is true cybercrime with dad jokes. It’s a no-shame zone for anyone who’s ever been scammed, hacked, phished or cyber-bushwhacked. Every week, we feature fascinating people talking about the terrifying, annoying, embarrassing, or infuriating things they’ve experienced online. Join consumer affairs veteran Adam Levin with co-hosts Beau “Hack Me” Friedlander and Travis “Here's What Actually Happened” Taylor for a good story and tips on how to make yourself a litt ...
C
Crime Stories with Nancy Grace

16h ago16h ago
Subscribe
Unsubscribe
Daglig
Nancy Grace dives deep into the day’s most shocking crimes and asks the tough questions in her new daily podcast – Crime Stories with Nancy Grace. Nancy Grace had a perfect conviction record during her decade as a prosecutor and used her TV show to find missing people, fugitives on the run and unseen clues. Now, she will use the power of her huge social media following and the immediacy of the internet to deliver daily bombshells! Theme Music: Audio Network
T
True Crime Brewery

11d ago1w ago
Subscribe
Unsubscribe
Ukentlig
True Crime Brewery is a true crime podcast unlike any other! Husband and wife, Jill and Dick, use their medical knowledge and life experiences to take a deep dive into some of the most fascinating crimes from all over the world. Just for fun, Dick uses his expertise as a craft beer lover to review and/or recommend beers from the regions where each crime occurred. Meet them at the quiet end of the bar for a craft brew and a no-holds-barred true crime discussion.
H
Happy Face Presents: Two Face

16h ago16h ago
Subscribe
Unsubscribe
Månedlig
What would you do if you learned you were adopted, your biological mother was a convicted murderer and your father’s true identity was a mystery? This is what happened to Becky Babcock, the daughter of the infamous Diane Downs. Join Melissa Moore, host of Happy Face Season 1, as she helps Becky unravel the strange tale of her family, searching for answers to decades-old mysteries that remain unanswered in the modern day.
U
Unresolved

20d ago2w ago
Subscribe
Unsubscribe
Månedlig+
Every day, stories unfold that have no resolution. Unresolved is an investigative and immersive look at those stories, as host Micheal Whelan tries to determine why these stories - unsolved crimes and other unexplained phenomena - have no ending.
A
Australian True Crime

3d ago3d ago
Subscribe
Unsubscribe
Ukentlig
Think nothing ever happens in your town? Australia's suburbs are home to some of the most mysterious and disturbing true crime cases in the world.Meshel Laurie is a true crime obsessive. Emily Webb is a true crime author. And together with expert interviews with writers, victims, investigators and perpetrators, they probe the underbelly of our towns and suburbs, and uncover the darkness at the heart of Australian life. Support this show http://supporter.acast.com/australiantruecrime. For a f ...
F
Follow the Truth