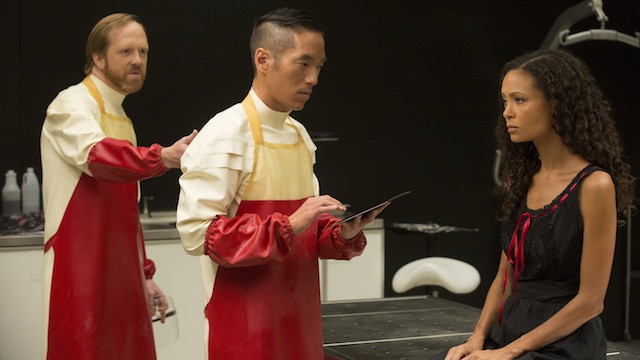 Listen to the Podcast:

Welcome to Westworld! Every week, Josh Wigler (@roundhoward) and Jo Garfein (@jopinionated) will discuss the new HBO series about an old west theme park built in a futuristic world, populated by robot hosts and human guests. Theories, analysis, and overall madness is sure to ensue.

This week, Josh and Jo talk about “The Adversary,” the sixth episode of the series. It’s a Thandie Newton showcase as Maeve questions and answers the nature of her reality, discovering the full basic truth about Westworld and her existence as a host. Plus, Robert Ford reveals some secrets of his own, and we can now officially name the young boy “Robot Ford,” much to a troubled Bernard’s chagrin. The mole stands revealed as well… or does she? And even without Dolores and William in play this week, there’s a blink-and-you’ll-miss-it development that all but confirms the two timeline theory.

In listening to your Episode 4 recap, Jo mentioned that Westworld isn’t the sort of show you can multi-task where you can multi-task while watching. And she was 100% correct. I felt completely lost and resolved to go back and binge watch the first five episodes…and I began to observe some interesting things that largely support a dual timeline narrative…one centering around William and Logan and one for pretty much everything else.

As I began to track the William and Logan storyline, which was featured in Episodes 2, 4 and 5 (with a brief touchpoint at the end of Episode 3), I noticed something interesting…there are quite a few characters, both in front of and behind the scenes, that NEVER intersect with their storyline. To note, William and Logan have never interacted or crossed paths with the following people: Teddy, Maeve, The Man in Black, Ford, Bernard, or anyone else working in what I term “Mission Control.” We only see them interact with Dolores, Clementine and (in Pariah) Lawrence. Of note, when Mission Control is considering retiring Maeve, they mention that Clementine could take over the brothel because she’s run it before. In Episode 2, we only see Clementine at the brothel when William and Logan first arrive in Sweetwater…no Maeve. Is she running it at this point? This also fuels my theory that Teddy is a host that was made as an homage to William…the two main “good guys” in Dolores’s life. Recall that both William and Teddy have an encounter with Dolores where she drops a canned good out of her bag and it rolls and they stop it with their feet…this could be viewed at the surface as just a nice parallel between two moments…or was Teddy re-enacting something he was programmed to that was meant to mirror a moment William shared with Dolores many years ago? And note that the Man in Black also mirrored the same “can stopping” action in a third instance. Further connection between William and the Man in Black?

There are a couple potential violations of this, depending on how you view the edit. First, at the end of Episode 3, right before Dolores shoots her potential rapist in the barn of her family’s homestead, she has a momentary vision where she sees her attacker as The Man in Black. She then rides off into the night to escape. Moments later, we see her stumble into William and Logan’s camp. At first glance, it seems she went there from the attack (in which case the Man in Black timeline and the William timeline are concurrent). But…she is no longer on a horse and we have no reason to believe William and Logan are camping near her homestead. So it’s uncertain.

Secondly, there is a moment when Stubbs is told that a host is out of their assigned area, and it is uncertain if they are with a guest or not. Later that episode, in the small town where Lawrence’s wife was killed, Dolores is approached by what seems like a park official, asking who she is with and if she is lost…and William steps in. Again, we are meant to assume these are part of the same timeline…but Stubbs could be addressing a completely different incident elsewhere.

Anyway, my mind is swimming with each episode…of both Westworld and your podcast. Thanks for the analysis!

Really excited by episode 6, in part because Maeve is awesome and in part because it provided more fodder for my favourite theory, that of Bernard being a host version of Arnold.

• The fact that the host version of Robert Ford’s family has existed for (presumably) at least 34 years outside of the system sets a precedent for unregistered hosts. It also sets a precedent for Ford using the hosts to recreate loved ones in happier times. Wouldn’t that include his former collaborator in their life’s work?

• Judging by Ford’s later interaction with his younger host self, these hosts follow the same rules as any other (which makes sense, considering we’ve already seen Young Ford encounter a guest–the Man in Black.) The father should not have been able to hurt a human, yet Ford interceded when he attacked Bernard…. Ergo, Bernard is not a human.

• Six episodes in, and we still don’t know Arnold’s full name? There’s a reason the writers are hiding it and him sharing a name with another character seems like it would require other characters to be particularly blind at this point. I’m standing by my Bernard Lowe / Arnold Weber anagram theory.

• When Elsie realizes somebody else is in the house, she calls first Bernard’s name and then Arnold’s. A sly tip off by the writers, because she’s right on both counts? (Perhaps this is a bit of wishful thinking on my part, since host Bernarnold shouldn’t kill human Elsie.)

The problem with the theory right now is that it supposes Ford to have created Bernard… but it seems Ford is not the perpetrator of these anomalies. Somebody else is talking to the malfunctioning hosts. Does that mean somebody else is controlling Bernarnold, or is there more than one solution to the Arnold mystery? A host Bernarnold *and* the real surviving Arnold somewhere?

1d ago1d ago
Subscribe
Unsubscribe
Daglig+
When your favorite show ends, we’re just getting started. Josh Wigler and friends lead recaps of the biggest TV hits, from genre favorites on HBO to binge-shows on streaming platforms and far beyond. Post Show Recaps comes from veteran entertainment journalist Josh Wigler and Rob Cesternino of Rob Has a Podcast.
B
Binge Mode: Marvel

2d ago2d ago
Subscribe
Unsubscribe
Ukentlig
In a unique weekly podcast, Edith Bowman sits down with a variety of film directors, actors, producers and composers to talk about the music that inspired them and how they use music in their films, from their current release to key moments in their career. The music chosen by our guests is woven into the interview and used alongside clips from their films. https://twitter.com/soundtrackinguk https://www.facebook.com/Soundtrackingwithedithbowman/ https://play.spotify.com/user/soundtrackingwi ...
T
The Chernobyl Podcast

17d ago2w ago
Subscribe
Unsubscribe
Månedlig
The official podcast of the miniseries Chernobyl, from HBO and Sky. Join host Peter Sagal (NPR’s “Wait Wait...Don't Tell Me!”) and series creator, writer and executive producer Craig Mazin after each episode as they discuss the true stories that shaped the scenes, themes and characters. Chernobyl airs Mondays at 9 PM on HBO and Tuesdays at 9 PM on Sky Atlantic. The Chernobyl Podcast is also available to stream on HBO NOW and HBO GO starting Monday, May 6 at 10 PM.
D
DumTeeDum - A show about BBC Radio's 'The Archers'

2d ago2d ago
Subscribe
Unsubscribe
Ukentlig
DumTeeDum is a weekly podcast about The Archers featuring fans of Ambridge. Hosted on Acast. See acast.com/privacy for more information.
I
I Was There Too

2d ago2d ago
Subscribe
Unsubscribe
Ukentlig
If you're like Matt Gourley (Superego, Drunk History, Conan O'Brien Needs A Friend), then you know all the classic movie and television scenes so well it's like you were in the room when they happened. Well, you weren't. And neither was he. But the people Matt interviews were! Listen in as they tell the inside stories of how cinema and television history was made from a fly-on-the-wall perspective you've never heard. Hosted on Acast. See acast.com/privacy for more information.
T
The Talking Dead - A podcast dedicated to the AMC TV series The Walking Dead