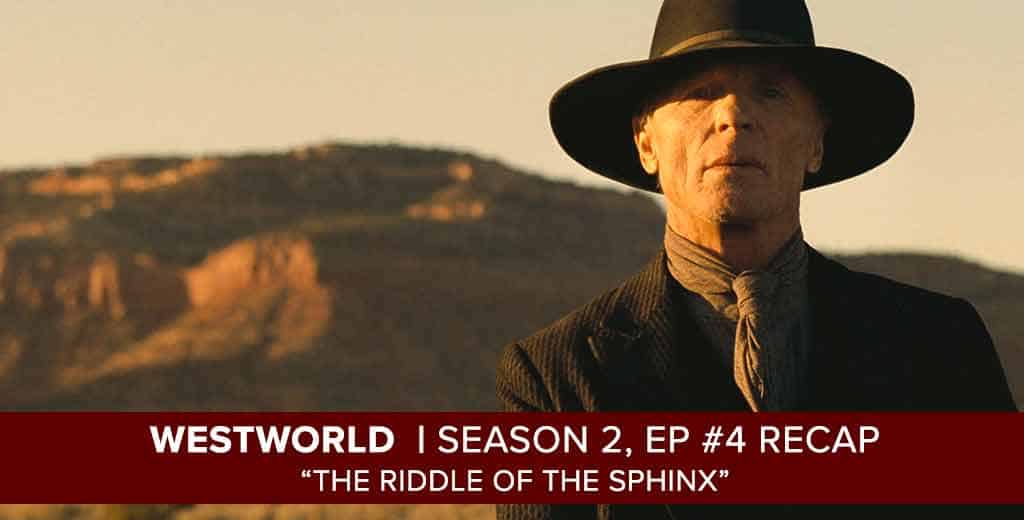 Westworld | Season 2 Episode 4 Recap: “The Riddle of the Sphinx”

Josh Wigler (@roundhoward) recaps the latest episode of Westworld, “Riddle of the Sphinx,” and his recap comes with an asterisk.

You know what they say: if you aim to cheat the devil, you owe him an offering — and in the case of the latest Welcome to Westworld podcast, the offering is co-host Jo Garfein (@jopinionated), who sadly could not appear this week due to being sick. Get well soon, Jo, and we’ll see you at Shogun World!

While our regular co-host is on the mend, Josh is joined this week by Emily Fox (@emelette), and how appropriate! In “Riddle of the Sphinx,” it’s revealed that Emily, the Man in Black’s daughter, is the same guest who escaped from The Raj in episode three. The Man in Black and Emily have reunited, just as Josh’s very bad Ed Harris impression and Emily have joined forces on the podcast.

In their conversation about “Riddle of the Sphinx,” Josh and Emily weigh in on what some fans have described as the best episode of Westworld yet, the various sequences involving Peter Mullan as James Delos, the possibilities and implications of the human-host hybrid experiments, the Man in Black’s apparent redemption arc, the return of Elsie Stubbs (!!), the secrets of Ghost Nation, and much more.

Let us know what you think of this week’s podcast in the comments below and send us your questions through our feedback form. Josh and Jo will be back next week to discuss episode five of season two, “Akane No Mai,” where all things Shogun World shall be revealed.

The post Westworld | Season 2 Episode 4 Recap: “The Riddle of the Sphinx” appeared first on PostShowRecaps.com.

6h ago6h ago
Subscribe
Unsubscribe
Daglig+
When your favorite show ends, we’re just getting started. Josh Wigler and friends lead recaps of the biggest TV hits, from genre favorites on HBO to binge-shows on streaming platforms and far beyond. Post Show Recaps comes from veteran entertainment journalist Josh Wigler and Rob Cesternino of Rob Has a Podcast.
B
Binge Mode: Marvel

21m ago21m ago
Subscribe
Unsubscribe
Ukentlig
In a unique weekly podcast, Edith Bowman sits down with a variety of film directors, actors, producers and composers to talk about the music that inspired them and how they use music in their films, from their current release to key moments in their career. The music chosen by our guests is woven into the interview and used alongside clips from their films. https://twitter.com/soundtrackinguk https://www.facebook.com/Soundtrackingwithedithbowman/ https://play.spotify.com/user/soundtrackingwi ...
T
The Chernobyl Podcast

19d ago2w ago
Subscribe
Unsubscribe
Månedlig
The official podcast of the miniseries Chernobyl, from HBO and Sky. Join host Peter Sagal (NPR’s “Wait Wait...Don't Tell Me!”) and series creator, writer and executive producer Craig Mazin after each episode as they discuss the true stories that shaped the scenes, themes and characters. Chernobyl airs Mondays at 9 PM on HBO and Tuesdays at 9 PM on Sky Atlantic. The Chernobyl Podcast is also available to stream on HBO NOW and HBO GO starting Monday, May 6 at 10 PM.
D
DumTeeDum - A show about BBC Radio's 'The Archers'

3d ago3d ago
Subscribe
Unsubscribe
Ukentlig
DumTeeDum is a weekly podcast about The Archers featuring fans of Ambridge. Hosted on Acast. See acast.com/privacy for more information.
I
I Was There Too

3d ago3d ago
Subscribe
Unsubscribe
Ukentlig
If you're like Matt Gourley (Superego, Drunk History, Conan O'Brien Needs A Friend), then you know all the classic movie and television scenes so well it's like you were in the room when they happened. Well, you weren't. And neither was he. But the people Matt interviews were! Listen in as they tell the inside stories of how cinema and television history was made from a fly-on-the-wall perspective you've never heard. Hosted on Acast. See acast.com/privacy for more information.
T
The Talking Dead